ENMG may perform expertise in assessment of what level is affected:

Motor and sensory conduction studies are applied routinely in examination of patients with:

F-wave study is necessary for diagnosis of radicular involvement in spondylosis.

In focal lesions of spinal cord (compression, trauma) and degenerations (i.e. ALS) H-reflex is used. If sensory conduction studies are abnormal in legs, a doctor should administer transcranial magnetic stimulation instead.

If nerve consuction is normal and excitation of muscles is abnormal, needle myography is performed. It is indicated in:

Global EMG allows to determine indications for needle EMG (if a patient has spontaneous activity), it is applied in diagnosis of myotonia, tremor frequency studies, mimic muscles contractures in facial nerve palsy.

President of “Real Health” Clinic Gleb Levitsky MD PhD is the author of unique Clinical and electromyographic algorhythm of differential diagnosis of neuromuscular disorders and syndromes (see below).  We do not propose You to study that material below in detail, of course, just look swiftly through the text and illustrations. Seeming at first glance sophisticated, this algorhythm allow an experienced doctor to perform only those ENMG studies, that are necessary for making diagnosis of a distinct disorder. However, it shows how to expand the protocol if during the examination the disorder is hypothesized other than initially.

Here I propose the differential diagnostic algorhythms for neuromuscular disorders and syndromes diagnosed clinically and by electromyography. These algorhythms were elaborated on the basis of foreign and Russian literature as well as on my personal experience. Regrettably, in literature sources there is often recommended to use a certain quantity of EMG techniques in different forms of neuromuscular pathology, however modest information is given about inter-examination research according to logistic algorhythms (1-4).

The syndrome of arm (foot) monoparesis

In the syndrome of arm/foot monoparesis  one may reveal isolated decrease of M-response (complex motor action potential, CMAP) and/or motor conduction with changes in F-waves or without that, without changes of sensory conduction and excitation (syndrome of motosensory dissociation). In this case, needle EMG is performed within the area of changed innervation. An examiner may reveal myopathy. In this case one should study 1-2 muscles more by needle EMG to be sure about the expansion of the disorder (this is a protocol for myopathy) (1,4,7,8). If a motor neuropathy is revealed without conduction block it is feasible to study additional nerves to reveal conduction blocks. If features of neuronopathy are revealed, generalized neuronal disorder should be ruled out. Diagnosis of generalized neuronopathy is performed according to the protocol of EMG examination in ALS (needle EMG is performed in 2 muscles of a lower extremity and 2 muscle of an upper extremity and 1 muscle of head or neck, and stimulation ENG should include motor and sensory conduction studies in 2 nerves of the upper and two nerves of the lower extremity, and 1 nerve of head or neck; H-reflex in calf muscles is feasible to study also) (9). For differential diagnosis of ALS and MMN (if at least one conduction block is revealed) needle EMG of less affected muscle is performed and motor and sensory conduction studies in one less affected nerve. For differential diagnosis of ALS and benign generalized motor neuron disorder (BGMND) needle EMG of less affected muscle should be performed. If in the less affected muscle the stage of denervation and reinnervation corrpesponds paresis it is more typical to ALS, if stage of denervation and reinnervation overrides the extent of paresis it is more typical to BGMND (10,11). If needle EMG reveals focal changes in  motor neurons and study of H-reflex reveals increased H/CMAP ratio, examiner should rule out the syndrome of focal  damage to cervical or lumbar enlargements of the spinal cord (in relation to where monoparesis was seen – in an arm or in a foot) and neuroimaging should be recommended to elucidate the cause of this damage (12, 13).

Motor and sensory conduction studies may reveal focal decrease of velocities (tunnel syndrome). In this case examiner should study 1-2 nerves on upper and lower extremities to reveal subclinical tunnel syndromes or polyneuropathy (4).

At last, in monoparesis one may reveal normal values while motor and sensory conduction studies. In this case it is feasible to study F waves: if they are changed, one may diagnose radiculopathy, but if normal – Y-reflex should be additionally studied in calf muscles. If Y-reflexes are elicited and normal (when sural nerve is unchanged), examiner should perform needle EMG, and if recruitment pattern is unchanged, one may suppose, that the paresis is functional (aggravation). Increased Н/CMAP ration allows to think that paresis is central. If foot monoparesis is present, examiner should expand the protocol to study motor and sensory conduction in hands ipsilaterally or bilaterally. If sensory and motor axonopathy and radiculopathy are revealed, the syndrome of focal damage to cervical enlargement of the spinal cord may be suspected. If studies of nerves of upper extremity is normal, paresis should be regarded to as of cerebral origin (4, 12,15,16).

The syndrome of upper flaccid paraparesis 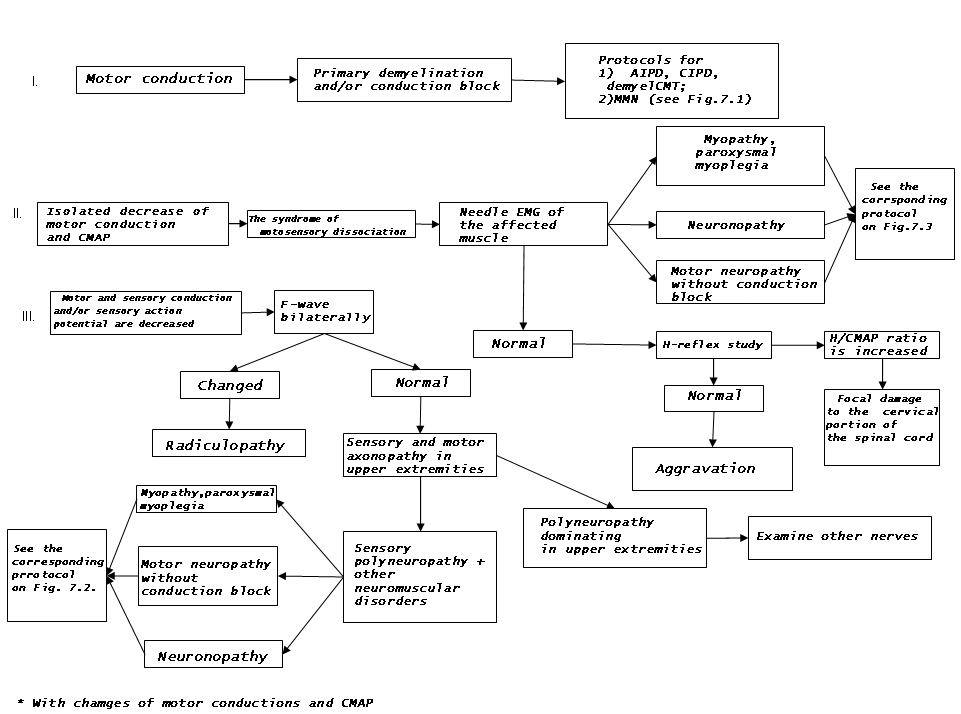 Figure III.2 Clinical and elctromyographic algorhythm of differential diagnosis for the syndrome of upper flaccid paraparesis

In the syndrome of upper flaccid paraparesis motor conduction studies may reveal generalized demyelinating neuropathy or conduction blocks, and in this case protocols for AIDP, CIDP of MMN should be used.

If an isolated decrease of CMAP amplitude or motor conduction is seen (the syndrome of motosensory dissociation), needle EMG of the affected muscles should be done, and features of myopathy (including paroxysmal myoplegia), motor neuropathy without conduction block or neuronopathy may be revealed (16). In these cases it is feasible to perform the study according to protocols recommended for these disorders. If needle EMG is normal, H-reflex should be studied. If it is normal, functional syndrome (aggravation|) may be considered, and clinical data should be addressed. If H/CMAP ratio is increased, paresis may be central (the syndrome of focal damage to the cervical enlargement of the spinal cord or encephalopathy).

If sensory conduction in nerves of upper extremities are decreased, F waves are examined. If pathological changes are revealed, it may be radiculopathy, if normal values are obtained – diagnosis of sensomotor axonopathy of upper extremities should be made. In the last case other nerves in upper extremities should be studied – the case may occur a polyneuropathy or its combination with another neuromuscular disorder with primary myopathy or neuronopathy. To rule out another neuromuscular pathology needle EMG is performed according to recommended protocols.

The syndrome of lower flaccid paraparesis 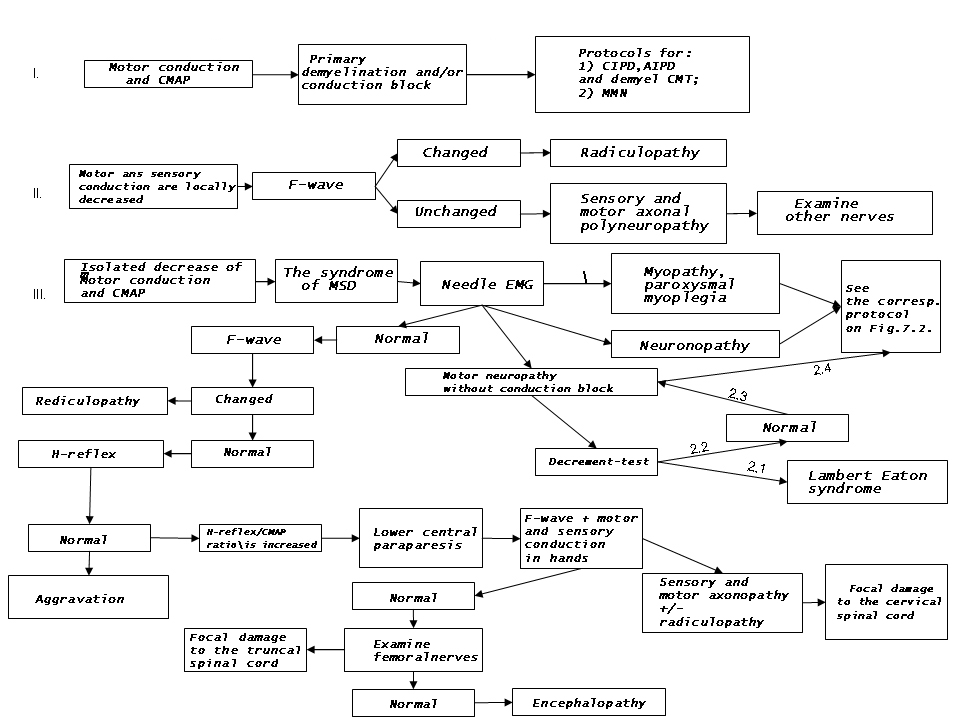 Figure III.3 Clinical and elctromyographic algorhythm of differential diagnosis for the syndrome of lower flaccid paraparesis

In the syndrome of lower flaccid paraparesis motor conduction studies may reveal generalized demyelinating neurpathy or conduction blocks, and in this case protocols for AIDP, CIDP of MMN should be used.

If isolated decrease of CMAP and/or motor conduction are revealed (the syndrome of motosensory dissociation) is revealed, needle EMG is indicated, which may reveal myopathy (including paroxysmal myoplegia), motor neuropathy, neuronopathy. In these cases, examined should perform the study according to recommended protocols for these disorders). It should be emphasized, that if features of motor neuropathy is revealed in lower extremities (especially femoral nerves), decrement test should be performed to exclude Lambert-Eaton syndrome (18). If needle EMG reveals normal values, F-waves should be studied to exclude radiculopathy: if changes in F-waves are absent, one should study H-reflex in calf muscles. If H-reflexes are not increased, one should rule out functional syndrome (aggravation), and clinical data should be addressed. If H/CMAP ration is increased, the conclusion is made about central lower paraparesis. In this case motor and sensory conduction with F-waves are studied. If sensory and motor axonopathy and radiculopathy of upper extremities are revealed, one should rule out the syndrome of focal damage to the cervical enlargement of the spinal cord (neuroimaging should be recommended). If in increased H/CMAP ration case normal values are obtained, one should rule out focal damage to the truncal portion of the spinal cord or encephalopathy  and neuroimaging) should be recommended (4, 12,13, 15,16). 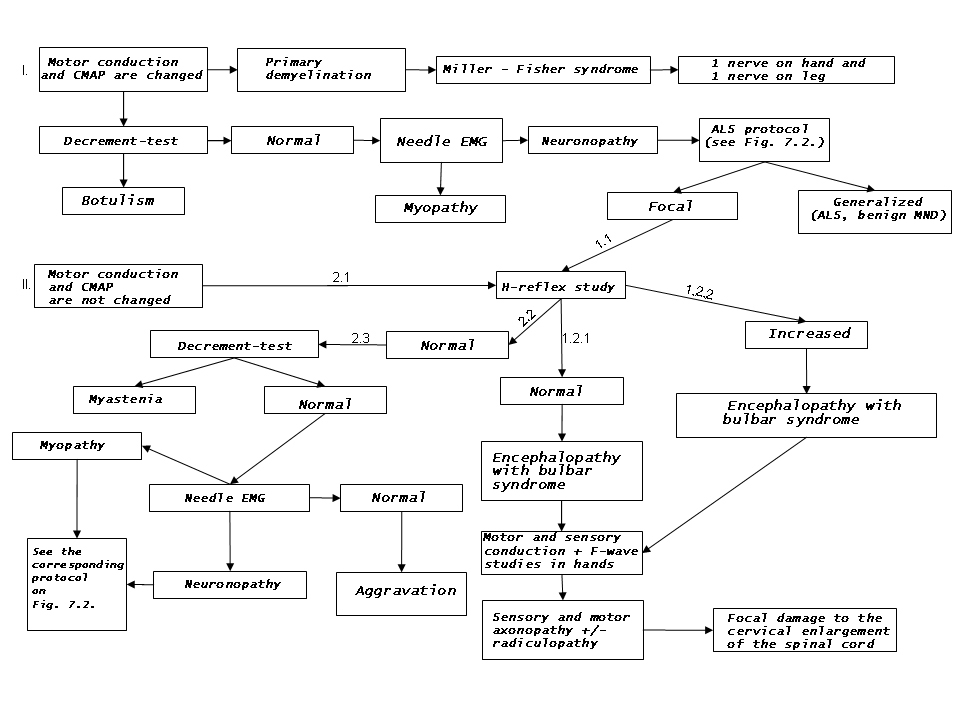 If bulbar syndrome is present and values of stimulation ENG in upper and/or  lower extremities are changed in a way to diagnose generalized demyelineation, one should rule out demyelienating polyneuropathy with bulbar onset (Miller-Fisher syndrome) (19). If axonopathy and demyelineation in nerves of upper extremities are seen, needle EMG should be performed on the bulbar level, where myopathy or neuronopathy may be revealed. If neuronopathy is revealed, its generalized nature should be ruled out. If local neuronopathy is seen, H-reflexes should be examined in calf muscles. Normal H/CMAP ratio with concomitant normal values of sensory conduction in legs may point out bulbar syndrome due to encephalopathy. Increased H/CMAP ration may also be seen in encephalopathy with bulbar and pseudobulbar syndrome. To define origin of these syndromes motor and sensory conduction in hands with F-waves in hands should be studied. If sensory and motor axonorapthy and radiculopathy in nerves of upper extremities are seen, the syndrome of focal damage to the cervical enlargement of the spinal cord should be ruled out (with possible compression of vertebral arteries) – the latter may cause bulbar or pseudobulbar syndrome or their combination (3, 12, 13, 15, 16).

If in bulbar syndrome CMAPs in muscles of upper extremities are unchanged, H-reflexes in calf muscles should be studied. If increased H/CMAP ration is revealed, the protocol for spondylotic cause of the syndrome should be followed. If H-reflexes are normal, decrement test should be done, which may reveal features of myasthenia or botulism. If decrement test is negative, needle EMG should be done. If it is unchanged, functional syndrome (aggravation) should be ruled out. Needle EMG may reveal features of neuronopathy ot myopathy when stimulation ENG is normal.

To ask the question

Herpes virus myelitis (HVM) develops in 1.2 – 6.3% of cases as a complication of herpes